About me: story of how I came to study fashion

Since I was a child I had an instinct, a passion, which was to create clothes for my Barbies. I was delighted when I was given a small piece of fabric: I created clothes that in my eyes were more beautiful than those of my girlfriends, bought for their dolls.

My mom tells me that even at the kindergarten, when I was asked to do any drawing, I was always adding to the subject also a person. If for example, I was asked to draw a tree, I pictured it, but close to it I created the space for a figure, usually female.

During primary school and taking more confidence with the pencil, I filled my diaries, some pages of those of my friends and a few books with drawings of girls and dresses for evening, day or wedding occasions. Since the diary didn’t have enough space, I also had a notebook where Iused to sketch my virtual fashion shows. Here are some memories:

At the middle school I certainly didn’t stop drawing, and I eventually acquired a bit more familiarity with the design, but despite my endless requests, no professor has never wanted or been able to give me instructions on the human body design.

As High Scool, my choice would definitely fell on an artistic institution or focused on fashion, but teachers and parents pushed me strongly for a more classic and comprehensive training, arguing that if my wish had remained solid over time, I could make it happen later. That’s how I enrolled at the Liceo Scientifico with bilingual experimental course (English and French).

My instinct for fashion did not die, and the school books of those years are plastered with sketches of clothes, faces and female bodies. In the summer of the third year, I had the opportunity to spend some quality time with my second cousin Claudio, who was born and lives in Belgium; he has a great ability to make caricatures and portraits, with a good mastery of color. He gave me some advices on how to color my pencil drawings, and it was a revelation to me! Finally my sketches were coming to life… In the meantime I had “invented” a pseudonym, I wanted it to be a symbol of my “full” womanhood, already at that age. During art history classes we studied the so-called Venus statues, symbol of creativity and fertility, which had always been depicting as sinuos women. Konowing these things, I felt fully reflected in the name Venus.

To satisfy the desire to create clothes, as well as draw them, during the 4th year at the high school I enrolled some evening cutting and sewing courses, thanks to which I could realize with great satisfaction my first garments, designed and sewn by me! The workmanship was not really my strongest capability, but it was so nice to finally wear something that I had designed and built …

My passion was therefore confirmed, and as I approached the end of high school I inquired about the various possibilities of the existing fashion design schools. With great sadness, I found that they were almost all private with annual boarding costs totally unrealistic, for my family. I was almost thinking to give up, or go to work to afford that kind of education later, when a competition announcement issued by the Corriere Lavoro (insert of Il Corriere delle Sera) for a scholarship at the European Institute of Design in Milan reawoken my hopes.

I enrolled in the competition, and my proposal was accepted. In September, I was called to the first screening test. It was a psychological test, where questions and answers did not seem to have any connection with my artistic instincts. We were about 120 students for three scholarships, one for each specialisation. On that occasion I feared not to pass the test, because I realized that finally through that exam I would saw the confirmation or the tragic deny of my creative instinct, and I had a large competition … But, fortunately, in October I was called to challenge, with 5 other guys through an interview, the only scholarship for grabs between the schools of Fashion or Jewel Design at the IED. I still remember that trip when I was only nineteen, accompanied by the only person who was free to do it: my dearest grandmother Beppina, 72 years old at that time, but who worked as housekeeper in Milan at 14 years! I remember the thrill, the excitement, but also the passion put to convey my wish to the representative, supported by a sheet of notebook where I had bound my own designs in the spare time. Here are some extracts:

At that time cell phones were not yet of common use, and only when I got home in the evening, my parents told me that I had been selected.  (They first asked me to tell them everything, then they asked me if I thought it was gone well; to my answer: “I hope so, we’ll see”, they countered with, “Then it went well.” And I :”I hope!”, and they: “It went well! ;-) We’re telling it now to you… “)

Thast’s how, in a big hurry, I found an accommodation in Milan and began the long-awaited Fashion School of the IED in via Sciesa 5. 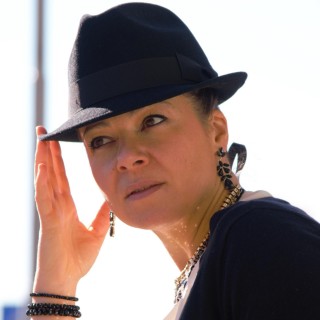 I've worked in the fashion industry since 15 years, and now I want to create something stylish for curvy girls.